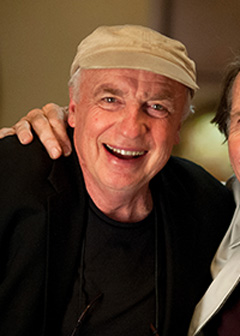 Director David Parker was drawn to The Menkoff Method’s script by its humour.

“It is pretty rare that you get a script across your desk where you actually laugh out loud and this happened. I loved the absurdity of it and the basis – the little guy winning through and the bad guys getting their just desserts.”

He says the film is a comedy that’s got action and a love story. To make it work, he had to find a cast who got it, who understood the joke.

He has high praise for his cast describing Noah Taylor as “an absolute treasure”, Catherine McClements as a “wonderful actress”, Lachlan Woods and Jessica Clarke as “standouts during the audition process.

“These newcomers to the business had precisely what I needed. I was surprised to cast such inexperienced actors in the key roles, but they shone out.”

David Parker says that a 25 day shoot is as tough as it gets for a movie with plenty of action and animals, and he is delighted with the final product.