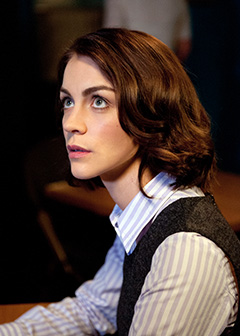 Jessica Clarke learnt the very basics of stage combat for her very strenuous role. She credits The Menkoff Method’s stunt coordinator, Reg Roordink with making her feel comfortable in the role. “I was able to cheat it and then Chan Griffin helped me choreograph the fights. He made it as simple as possible to make it look really convincing on screen.”
As well as fighting Max Menkoff and his henchmen, Jessica also had to abseil down the wall of a building which required some extensive training.

Jessica only graduated from the Western Australian Academy of Performing Arts in 2011 and The Menkoff Method was her first feature film, but since then she has appeared in both The Moon And The Sun and 2:22.  Her television credits include The Beautiful Lie, The Doctor Blake Mysteries, Miss Fisher’s Murder Mysteries and Blue Heelers and she has a range of stage credits.  Jessica was nominated as Best Newcomer and Best Supporting Actress for her performance in Waltzing The Wilarra at the 2011WA Equity Guild Awards.