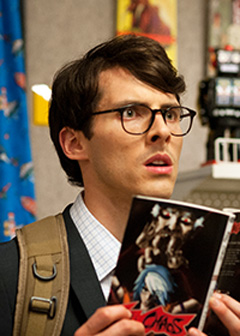 Since graduating from the prestigious Victorian College of the Arts, some of Lachlan's work includes appearing as ‘Freddie Mercury’ in the mini-series ‘Molly’ based on Molly Meldrum’s life, the SBS series ‘Better Man’, James Cameron’s ‘Deep Sea Challenge 3D’, ‘The Underbelly Files’, ‘Neighbours’, ‘Winners & Losers’ and theatre productions including ‘Richard III’, ‘Hamlet’ and most recently ‘North by Northwest’ for the Melbourne Theatre Company.

Lachlan had to undergo stunt training for ‘The Menkoff Method', even though his character was usually on the receiving end in fight scenes.  He’s quick to point out that the ‘victim’s’ reaction is as important as the person inflicting the punches. “Half of it is in how you sell the punch. It’s my responsibility to make Jessica’s punches look good – but don’t tell her that!” he says about his co-star Jessica Clarke.

He also enjoyed the opportunity to delve into the rich and vibrant world of Japanese Manga, and learn some of the techniques needed to draw David’s comic.