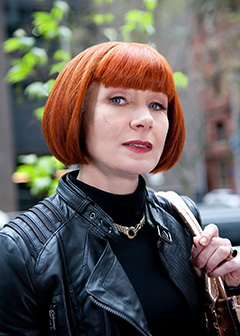 Olga Makeeva needed no assistance with her Russian accent. Born and bred in Russia, Olga trained with the State Academy of Theatrical Arts in Moscow. She was able to help fellow cast members Noah Taylor and Mal Kennard perfect their dialogue, pointing out the nuances of the language.

“Menkoff’s name is Max. In Russian that sounds like Mux. There is also the emphasis on the last syllable of words, like idiot.  They are both very good students and do very good Russian accents.”

After her initial training, Olga went on to work with the Soviet Army Theatre for 13 years and is quick to point out she didn’t have to join the army to join the theatre.

As a theatrically trained drama actress, Olga was fascinated by the film process.  “I am not an experienced film actress. Noah and Mal are experienced.  It’s been interesting.”

The very idea of the film drew Olga to it. “The storytelling is fantastic. And it’s comedy – I love comedy.”