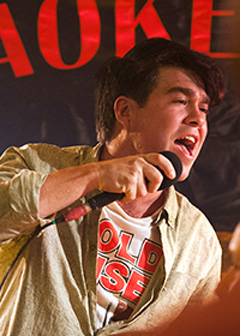 Andy Ryan really enjoyed playing Gary, David’s mate at Endobank. “He is your everyday Australian office nice guy who really wants to be a rock star. It’s a shame he can’t sing, but he exudes so much confidence there’s no telling him he’s wrong.”

Andrew says David Parker gave him every actor’s favourite ‘note’ when he and Lachlan were about to film the karaoke scene, telling him to “just have fun with it”.

“Lachy has impeccable comedic timing and was already making me laugh before I had to sing. On top of that Jess brought her stunning sexiness at the end of the scene when she literally stepped out of the animation.”

Andy had great fun working with David Parker.  They would share five or six jokes before starting the day’s filming.